Use the Materials, Support the Work

We’re working hard to create the sketches, worksheets, and support materials for these Web Sketchpad activities. Ours is a volunteer effort on the part of everyone involved, both curriculum developers and field testers, and we make these activities freely available for you to download and use with your own students.

As we develop, revise and expand the activities, we need your help. Email your commentary (What worked well? What didn’t?) and your suggested improvements to the webmaster. 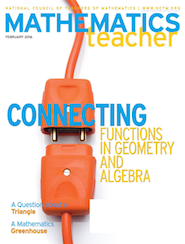 Connecting Functions in Geometry and Algebra

In this article we describe a way of forging a strong connection between geometric and algebraic functions, a connection that can deepen students’ concept of function and develop their appreciation for the interconnectedness of geometry and algebra. [from the article]

This cover story by Daniel Scher and Scott Steketee in the February 2016 Mathematics Teacher is based on our curriculum unit Connecting Geometry and Algebra Through Functions. This unit’s Web-Sketchpad-based activities connect functions in geometry (transformations whose variables are points on the plane) with functions in algebra (whose variables are points on the number line).

This is the first Mathematics Teacher article to incorporate live dynamic-mathematics figures in the online version, allowing readers to manipulate the mathematical objects in those figures as they read.


Abstract: Students work with geometric transformations as functions that take an input point and produce an output point, and relate these functions to algebra by using them to construct the Cartesian graph of a generalized linear function. They dilate and then translate a point, restrict these points to number lines, and ultimately observe that in the algebraic equation y = mx + b, m corresponds to the scale factor for dilation and b corresponds to the length of the vector for translation.


The activities described in the article are available in the Connecting Geometry and Algebra Through Functions curriculum unit.

This web site is based in part upon work supported by the National Science Foundation under NCSU IUSE award 1712280 (July 2017 through June 2019) and KCP Technologies DRK-12 award ID 0918733 (September 2009 through August 2013). Any opinions, findings, and conclusions or recommendations expressed in this material are those of the author(s) and do not necessarily reflect the views of the National Science Foundation.

We are deeply grateful to McGraw-Hill Education for making Web Sketchpad available for these activities.